Live a Watersports Lifestyle and Harvest the Long Term Benefits

Challenge Yourself and Push the Limits

Ride your kite only driven by the wind and be thrilled by gliding on the water. Kite surfing is a fast pace learning activity. You will learn the basics and ride on your own in minutes. Our team of instructors will ensure that you will enjoy every moment and have the best experience.

Enjoy the sea and its pink sand with crystal clear water. Kitesurf and feel the saltwater on your skin and the wind on your face. This feeling will be unforgettable. Learn how to glide over the water easily, fast, and safely. If you seek more thrilling feelings, we can teach you: If you want to take the first step, choose our beginner lessons, and we will guide you through the process. 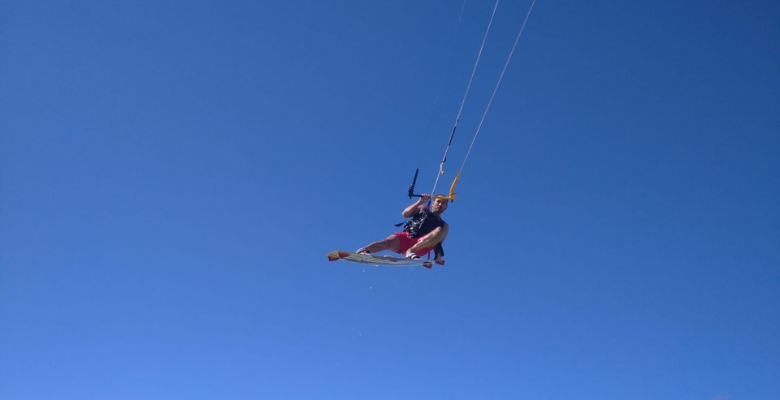 Experience Ultimate Satisfaction in the Water

If you are a pro, take intermediate lessons and practice with us in the most stunning moves, jumps, tricks, transitions, back rolls, unhooked, kite loops, wave riding, etc. Test your limits and board with or without straps, try impressive turns, maneuvers and most important, how to get the waves.

Our equipment is well maintained, and our supplier company is F1. Kitesurfing is seen as a mid to high-intensity exercise, but free-riding can be a low-intensity practice like walking and is usually done in long sessions of up to 2–3 hours. It is amenable to almost all ages, at least from teenagers up to 70 years old. It can be seen as a supplement or a substitute for other fitness practices.

Kitesurfing is an extreme sport where the kiter uses wind power with a large power kite to be pulled on a water, land, or snow surface. It combines aspects of paragliding, surfing, windsurfing, skateboarding, snowboarding, and wakeboarding. Kitesurfing is among the less expensive and the more convenient sailing sports.

After some concepts emerged in the late 1970s and early 1980s, some designs were successfully tested, and the sport received a wider audience in the late 1990s and became mainstream at the turn of the century. It has freestyle, wave-riding, and racing competitions. The sport held the speed sailing record, reaching 55.65 km (103.06 km/h) before being eclipsed by the 65.45 km (121.21 km/h) Vestas Sailrocket. Worldwide, there are 1.5 million kitesurfers, while the industry sells around 100,000 to 150,000 kites per year.

Did you know that the largest kitesurfing wave is Nuno “Stru” Figueiredo Nazaré – Portugal – 8 Nov 2017 19 mts. The World Record was verified by IFKO and Guinness World Records.

A Team of Passionate
Individuals

Elafonisi Extreme Sports Club is a team of passionate individuals that share our love for outdoor sports. We organize trips not just to serve our own needs, but also to share with others.

Trust and listen to our team
to Perform

Wherever you are going, we will support you with our experience, references and genuine human approach to ensure your safety while delivering a unique experience that you would never forget.

Overcome Your Fears
and Master Your Skills

Elafonisi is a one-stop shop for all your kiteboarding needs. With our help you can overcome your fear of extreme sports and become a complete rider!

A Dynamic Group of Enthusiasts and Professionals

Beginner lessons are done with specialized beginner equipment. In this lesson, you learn the basic Kite theory and safety issues. At the end of the course, you will be an independent rider, knowing how to set up and fly the kite, how to body drag and how to water start. If you are a group of friends you can take the beginner lessons in a group of two or three people together.

When you book a lesson we provide free equipment usage after the lesson so you can practice (upon availability). The prerequisite is that the weather conditions are favorable.

The table below shows the prices for advanced equipment rental. If you bring your own equipment during your vacations, storage and security of your equipment is available too. When you rent equipment, you can pay a small insurance for damages you probably do. Take consideration that equipment Insurance covers damages up to a level, as total destruction or loss of equipment due to bad practice or due to not following our crew advice will be fully compensated. The prerequisite is that the weather conditions are favorable.

We also organize kite boat trips. For more information and reservations please contact us by fullfiling the contact form below and choosing Kite Boat Trip in interest.

Welcome to Elafonisi Kite Club, unique view, crystal clear water, and pink golden sand. A place to enjoy kitesurfing and sup for the non-windy days. Learn new tricks in the lagoon or start kitesurfing with us.

Welcome to Elafonisi Kite Club, unique view, crystal clear water, and pink golden sand. A place to enjoy kitesurfing and sup for the non-windy days. Learn new tricks in the lagoon or start kitesurfing with us.